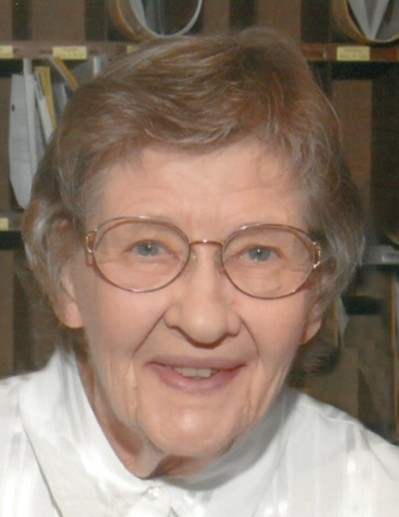 A funeral service will be held 11 a.m., Thursday, August 2, 2018, at St. Paul’s Lutheran Church in West Miltona with Rev. Terry Finnern officiating.  Music is provided by organist, Katie Jahnke.  Burial is at the church cemetery.

A visitation is 6-8 p.m., Wednesday, August 1, 2018, at Lind Family Funeral Home in Parkers Prairie and will continue one hour prior to the service at the church.

Lena Selma Maria Burke was born on April 15, 1926, to Gustav and Karolina (Kiesow) Kalpin in Moylan Township, Goodridge, Minnesota.  She was raised on the family homestead, attended country school and graduated from Lincoln High School in Thief River Falls in 1944.  Following her education, she worked as a night shift telephone operator in Thief River Falls and through her work, she met her future husband, “Buster”, who also worked the night shift at the Soo Line Railroad as a dispatcher.   Their phone calls on the night shift led to a union that lasted 57 years. Lena and  Arthur “Buster” Burke were married on May 27, 1949, in Bertha, and celebrated at her aunt and uncle’s farm.  Following their marriage, they lived in Enderlin, North Dakota, Spring Lake Park, Minnesota and Brooklyn Center.  They later retired to Parkers Prairie on Lake Vermont in 1992.  She lovingly cared for her husband until his death in 2006. She was a member of St. Paul’s Lutheran Church, Parkinson’s Support Group and was a volunteer for Feed My Starving Children and Loaves and Fishes in the Twin Cities.  She enjoyed baking, gardening, canning, sewing, embroidering, and playing cards with family and friends.

She was preceded in death by her parents and husband.

Memorials preferred to St. Paul's Lutheran Church in West Miltona or to a Food Shelf of your choice.

For specific directions to St. Paul's Lutheran Church in West Miltona, please hit the Service Details tab on this page and it will lead you to directions.  Please don't hesitate to call the funeral home if you need further assistance.  218-338-2911.

To order memorial trees or send flowers to the family in memory of Lena Burke, please visit our flower store.
Send a Sympathy Card