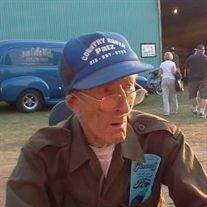 Lawrence Gallen Norris was born December 25, 1929, to Stanley and Laura (Harris) Norris in Ellendale. He attended country school. He was united in marriage to Donna May Chamberlain October of 1948, at Irvington Presbyterian Church in Irvington, Iowa. Lawrence worked on a ranch in North Dakota for several years. He moved to Grove Lake where he farmed and sold oil for Cen-pea Oil Company from 1957 - 1980. In 1980, Lawrence moved to Parkers Prairie to farm and sell scrap iron with his son, Wayne. He retired in 2014. Lawrence enjoyed fishing, going to tractor shows, the Vining Watermelon Feed and Parkers Prairie Lion's Smelt Fry.


To order memorial trees or send flowers to the family in memory of Lawrence Norris, please visit our flower store.