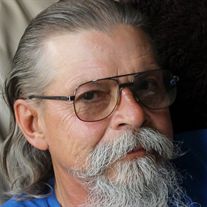 Lawrence T. "Larry" Berkland, age 60, of Big Fork, formerly of Owatonna, died peacefully with his wife by his side, Wednesday, May 7, 2014, at his home.

Visitation is 4-7 p.m., Sunday at Lind Family Funeral Home in Parkers Prairie and continue one hour prior to the service at the church.

Captain Lawrence "Grey Beard" Berkland was born March 4, 1954, the son of Thomas and Angeline (Turchin) Berkland in Parkers Prairie. Lawrence lived with his parents just outside of Almora. He started his formal education at country school in Almora. He continued his education at Nekoma, North Dakota and Clearbrook and Oklee, Minnesota before he returned to Almora for the 6th and 7th grade. Lawrence completed his education at Henning High School where he graduated in 1972. Following graduation, Lawrence served in the United States Army in Germany until 1973. He was united in marriage to Mae Myren June 14, 1975, at Spruce Hill Lutheran Church. They were blessed with two daughters, Melissa and Jenny. Lawrence worked for Wadena Silo Company from 1974-1977. In 1977, Lawrence continued his education by attending the civil engineering program at Wadena AVTI. Following graduation in 1978, Lawrence went to work for Norman County Highway Department at Ada, and he and Mae lived in Borup. They purchased the Borup Café in 1986, with Clyde and Helen Hennen. In 1992, Lawrence accepted the Assistant County Engineer position at Steel County Highway Department in Owatonna. A highlight in Lawrence's life was going to Washington D.C. in 2007, and presenting at the National Transportation Conference on composites used for highway construction. Following his retirement in the spring of 2009, Lawrence formed Scenic Pines Consulting to assist contractors with storm water management. In the fall of 2009, he went to work at the Kettle Falls Hotel on Rainy Lake. Lawrence changed the focus of his company in 2011, after obtaining his Merchant Mariner credentials as a Master Captain, becoming a fishing guide. He was involved in guiding at Kettle Falls Hotel. Lawrence was always active in one form or another. He was a member of the V.F.W. and American Legion. His hobbies included hunting, fishing and motorcycling.

Besides his parents, he was preceded in death by his mother and father-in-law, Phyllis (Simonson) and Wally Myren.


To order memorial trees or send flowers to the family in memory of Lawrence Berkland, please visit our flower store.
Send a Sympathy Card