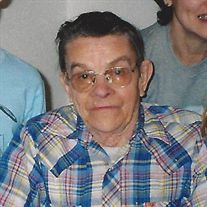 LaVerne Kenneth Olson was born February 29, 1940, to Paul and Tena (Nelson) Olson in Bertha. He was baptized and confirmed in the Lutheran Faith. LaVerne grew up in the Parkers Prairie area where he attended country school and Parkers Prairie Public Schools, where he graduated in 1958. Following his graduation he moved to Cut Bank, Montana to work as a grain farmer. LaVerne was united in marriage to Linda Michaels October 14, 1962, at St. Paul's Lutheran Church in Cut Bank. Following their marriage they lived in Parkers Prairie, Hewitt, and Minneapolis before settling in Deer Creek where they dairy farmed for over 40 years. They returned to rural Parkers Prairie in 2006. LaVerne was a member of Trinity Lutheran Church in Deer Creek. He enjoyed collecting international toy tractors, loved farming and being with his cows. He especially enjoyed spending time with friends, family, and primarily his grandchildren.
He was preceded in death by his parents; and several aunts, uncles and cousins.

Laverne is survived by his wife of 52 years, Linda; daughter, Tammy (Tom) Welle of Alexandria; and three grandchildren, Alyssa, Eric and Nicolas.

To order memorial trees or send flowers to the family in memory of LaVerne Olson, please visit our flower store.
Send a Sympathy Card