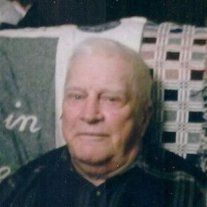 Funeral services will be held 11:00 a.m., Saturday, February 16, 2013, at Ebenezer Lutheran Church in Leaf Valley with Rev. Dennis Angland and Rev. Kirk Lee officiating. Music will be provided by organist, Kristi Wussow. Burial will take place at the church cemetery.

Visitation will be 4-8 p.m., Friday at Lind Family Funeral Home in Parkers Prairie and continue one hour prior to the service at the church.

Laverne Donald Kalpin was born March 23, 1928, to Fred and Vivian (Duberowski) Kalpin in Leaf Valley Township. He grew up in Leaf Valley Township, was baptized and confirmed at Ebenezer Lutheran Church and attended Country School District #59. Following his education he farmed with his father. Laverne served active duty from December 7, 1950 - September 9, 1952, in the U.S. Army during the Korean War. Following his honorable discharge, Laverne returned to Leaf Valley where he bought his uncle's farm in 1954. Laverne was united in marriage to Susan Riedel April 10, 1955, at Ebenezer Lutheran Church. Following their marriage they farmed and raised their family in Leaf Valley. Laverne never retired from farming, he just got tired towards the end. He was a member of Ebenezer Lutheran Church where he served on the church council and sang in the choir. He was also a former member of the Leaf Valley Fire Department and Leaf Valley Township Board. Besides being out in the field farming, Laverne enjoyed hunting, trapping, ice fishing and his monthly trips to the casino. He especially enjoyed visiting with neighbors and spending time with family.

An extra special heartfelt thank you to Jodi Klimek for the gift of time and care she gave dad.

To order memorial trees or send flowers to the family in memory of Laverne Kalpin, please visit our flower store.
Send a Sympathy Card