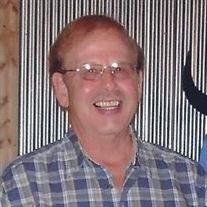 Visitation is 6-8 p.m., Tuesday at Lind Family Funeral Home in Parkers Prairie and will continue one hour prior to the service at the church.

Larry Arnold Johnson was born August 11, 1939, to Arnold and Pearl (Peterson) Johnson in Wadena. He was baptized December 23, 1939, in Henning and his sponsors were Orpha Peterson and Lester Peterson. Larry was confirmed May 23, 1954, at First Evangelical Lutheran Church in Parkers Prairie. Larry attended Parkers Prairie High School where he was active in sports and music, playing baseball, football, singing in the choir and playing trombone in band. He graduated as class Valedictorian in 1957. He continued his education at Concordia College in Moorhead where he sang in the Concordia Concert Choir. He spent summers as a life guard and Red Cross Swimming Instructor. Following his college graduation in 1961, he entered the U.S. Army and was stationed at Fort Ord, California. He served in Special Services where he played trombone in the Army Band. Following his honorable discharge Larry taught school in California for many years. He returned to Parkers Prairie in 1978. He was united in marriage to Sharon Ellingson on August 7, 1982, in Parkers Prairie. Following their marriage they lived in Parkers Prairie until they moved to Alexandria in 1989. Larry worked at the Pope County Courthouse in Glenwood and retired in 2010, after 10 years of service. Larry had a love for music, old cars, and going to car shows. He also enjoyed fixing old radios, going for drives, traveling and watching NASCAR.

He was preceded in death by his parents; daughter, Melissa Ann; niece, Karissa Ellingson; and sister-in-law, Joyce Johnson.


To order memorial trees or send flowers to the family in memory of Larry Johnson, please visit our flower store.