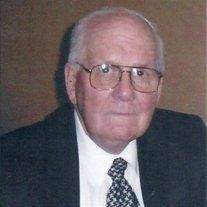 Visitation will be 4-7 p.m., Friday, at Lind Family Funeral Home in Parkers Prairie and continue one hour prior to the service at the church.

Larry Edward Bowland was born July 11, 1931, to Thomas and Willa Mae (Duncan) Bowland in McDonald, Pennsylvania. He grew up in Pennsylvania, Texas, Missouri, Arkansas and Illinois, where he attended parochial school in Franklin Park, a suburb of Chicago. He was baptized September 26, 1937, at First Lutheran Church in Chicago and confirmed April 30, 1950, at Immanuel Lutheran Church in Parkers Prairie. He was united in marriage to Ruth Rachel Riedel June 23, 1949, in Helena, Montana. Following their marriage they lived in Chicago, where he worked in a steel foundry for a few years before returning to Parkers Prairie where they made their home and raised their family. He was a truck driver for most of his life, Penrose Oil, Dray Line and Krohnfeldts all out of Parkers Prairie, and the last 27 years with Dahlen Transport out of Alexandria before retiring in 1993. He also worked construction and owned a Phillips 66 gas station with his brother-in-law, Lawrence Raap. He worked for Midwest Telephone, the Locker Plant, the Creamery, and many other jobs in the trades in Parkers Prairie. Following retirement, he worked as an assistant with Markham-LaMere Funeral Home. He was a member of Immanuel Lutheran Church in Parkers Prairie where he served as an usher and past elder and chairman of the board. He was a member of the Teamsters and also served as Union Steward. He was a charter member of the Parkers Planning and Zoning Committee, Vice-President of the Parkers Prairie/Urbank Bomber Baseball team for many years, Sports Boosters President, Chain Gang Volunteer for PPHS Football and in his later years, volunteer driver for Meals on Wheels. His hobbies included morning coffee at the Round Table with friends, baseball and football. He especially enjoyed deer hunting with his family and sons, casino and bingo with Ruthie, family and friends.

He was preceded in death by his mother, Willa Mae Rash and brother, Thomas Bowland.

To order memorial trees or send flowers to the family in memory of Larry Bowland, please visit our flower store.