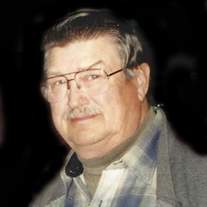 Visitation is 5-8 p.m., Wednesday at Lind Family Funeral Home in Parkers Prairie and will continue one hour prior to the service at the church.

Junior Adolph Cigelske was born on March 29, 1930, to Adolph and Oliva (Lemke) Cigelske in Avon. He was the oldest of 13 children and was considered the family trail blazer. He attended country school through eighth grade and furthered his education for one year of high school in St. Cloud. Following his education he embarked on a life-long career mostly in the field of silo building augmented by work for farmers in the off season and with a break for military service. He served in the US Army during the Korean War and was stationed in Germany translating in his first language of German. After his service he returned to the Avon area and eventually established his own business naming it Avon Silo Co.

He was united in marriage to Helen Birr Lemke on June 9, 1956, at Holy Cross Lutheran Church in St. Cloud. On New Year's Eve, 1964, he moved his family and business to Parkers Prairie, where he lived the rest of his life. He was proud to say that he had been a silo builder all his life, that he had twice fallen from the height of thirty feet and survived and that he never retired.
Work was his passion, yet, in his youth he enjoyed hunting and fishing. He especially enjoyed gatherings with his family and going out to dinner with friends. He was a long-time member of Immanuel Lutheran Church. Junior's family wish to extend their sincere appreciation for the love, care, and friendship Junior received from the staff, especially, Kelly, Joni, Marilyn and Gerri, while at McCornell Court Assisted Living and St. William's Living Center.

To order memorial trees or send flowers to the family in memory of Junior Cigelske, please visit our flower store.