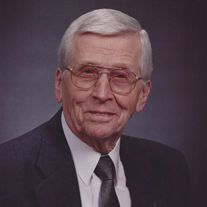 John W. H. Wilke, age 95, of Alexandria, died Friday, August 14, 2015, at Knute Nelson in Alexandria.
Funeral services are 2 p.m., Thursday, August 20, 2015, at Zion Lutheran Church with Rev. David Hinz and Rev. Geoff Gronewold officiating. Music is provided by organist, JoNette Brogaard and vocalists, Cresta and Iver Hubert. Burial is at Parkers Prairie Cemetery.
Visitation is 5-8 p.m., Wednesday at Lind Family Funeral Home in Alexandria and will continue one hour prior to the service at the church.
John William Herman Wilke was born September 21, 1919, to William and Emma (Ruckheim) Wilke in Parkers Prairie Township. He was baptized October 19, 1919, at St. James Lutheran Church, Effington Township and confirmed in 1933, at Immanuel Lutheran Church in Parkers Prairie. He attended Country School District #250, in Parkers Prairie Township through the 8th grade. He was united in marriage to Arlene Olson July 18, 1943, at the Immanuel Lutheran Church Parsonage in Parkers Prairie. Following their marriage he continued farming until 1969, when they moved to Minneapolis where he worked as a machinist until 1971. They relocated to Battle Lake where he worked at Glendalough Game Farm until 1973, and Paynesville Turkey Industries in Paynesville until 1978. He retired as a machinist from ITW Heartland Components in Alexandria in 1990. Following retirement, he continued helping various family farms with field work as needed. His hobbies included fishing, woodworking, gardening and reading. He enjoyed volunteering, and served on the shut-in tape ministry at Zion Lutheran Church and delivered mail at Knute Nelson. He was a former member of Immanuel Lutheran Church and its Men's Club.
He was preceded in death by his parents; wife, Arlene; son, Dennis; an infant brother and six sisters.
John is survived by his three daughters, Cynthia (Rohland) Atchison of Ham Lake, Priscilla "Penny" Erickson of Belgrade and Jennifer (Carl) Guderjahn of Alexandria; six grandchildren, Cresta (Iver) Hubert of Minnetonka, Melanie (Jay) Carpenter of Richmond, Joshua Leitch of Choctaw, Oklahoma, Douglas (Jamie) Pieper of Belgrade, Luke (Rachael) Leitch of Devils Lake, North Dakota and Zachary Leitch of Portland, Oregon; six great-grandchildren, Megan, Mackenzie and Peyton Leitch, Brandon Gocken, and Kaden and Taylor Pieper; along with many nieces and nephews.
Pallbearers are his grandchildren. Honorary pallbearers are his great-grandchildren.

To order memorial trees or send flowers to the family in memory of John Wilke, please visit our flower store.
Send a Sympathy Card