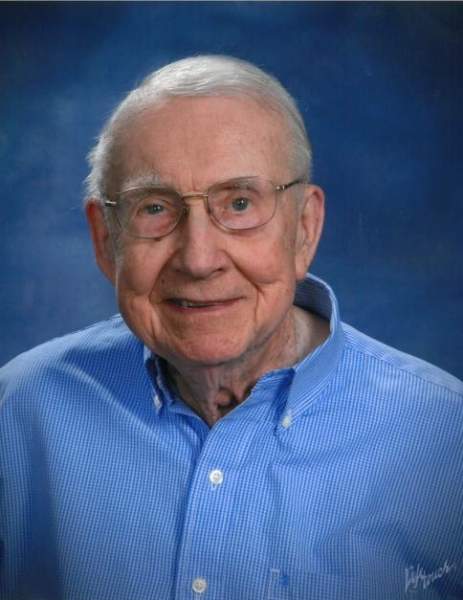 John J. Walz, age 97, a longtime resident of Alexandria died on Tuesday, October 24, 2017 surrounded by his family at Grand Arbor in Alexandria.

Visitation is 4-7 p.m., Friday at Lind Family Funeral Home in Alexandria with parish prayers at 4 p.m., and a Knights of Columbus Rosary at 7 p.m. The visitation will continue one hour prior to the service at the church.

John Jacob was born on January 25, 1920, in Fenton, Iowa to Albert and Martha (Gappa) Walz.   He grew up in Hollandale on the family farm where he attended public schools and graduated from Albert Lea High School in 1938. Following his education, he worked for Produce State Bank in Hollandale and First National Bank in Northfield.  He served in the United States Army Corp of Engineers as Master and 1st Sargent in Rhineland, Germany and Central Europe from 1942-1945.  He was united in marriage to Dorine Ann Kapsner on March 6, 1943, at the Ft. Snelling Chapel in Minneapolis. Following his honorable discharge, he returned to work at First National Bank in Northfield before moving to Alexandria in 1948.  He worked as manager for the Douglas County Insurance Agency in Alexandria for 34 years, retiring in 1982.

He was an active member of St. Mary’s Catholic Church and its committees, past Commander of the Alexandria American Legion Post 87, Alexandria VFW Post 936, Knights of Columbus Council 4718 and Alexandria Library Board.

He enjoyed coin collecting, fishing, gardening, bird watching and appreciating and observing nature throughout his life.  He especially relished time spent with his family and helping others.

He was preceded in death by his wife of 55 years, Dorine; parents; three sisters, Kathryn Halferty, Lillian Sainer and Rozella Hanson; and two brothers, Leo Walz and Jerome Walz.

Pallbearers will be John’s grandsons.

Blessed be his memory.

To order memorial trees or send flowers to the family in memory of John Walz, please visit our flower store.