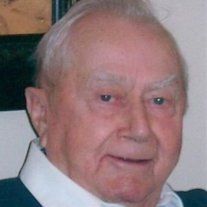 John A. Koep, Sr., age 94, of Alexandria, formerly of Urbank, died Monday, May 27, 2013, at Peaceful Bliss Assisted Living in Alexandria.

Mass of Christian Burial will be held 11:00 a.m., Friday, May 31, 2013, at St. Mary's Catholic Church in Alexandria with Fr. Steve Binsfed officiating. Music will be provided by Jody Koubksy and Tom Mulder. Entombment will take place at the St. Mary's Mausoleum.

John was born to Hubert and Barbara (Kraemer) Koep in Urbank, Minnesota on May 2, 1919. He was baptized and confirmed at Sacred Heart Catholic Church in Urbank. He attended country school in Effington Township. On September 15, 1942, John married Evelyn Poltiske at Seven Dolars Catholic Church in Millerville. They made their home in Urbank where they raised seven children. In 1979, John and Evelyn moved to Alexandria. John was a member of Sacred Heart Catholic Church in Urbank, and later St. Mary's Catholic Church in Alexandria. In his younger years, John worked at a number of different occupations, from working for area farmers, to owning the pool hall/dance hall in Urbank, to renting out bulls. He was a cattle jockey for many, many years - buying, selling, and hauling livestock until well into his 80s. He knew and was friends with everybody in the surrounding area and they knew him as an honest man of character and integrity. He always said, "A man's word is a man's word." He was the one to go to when you needed to sell livestock, machinery, or the farm! He was proud of having bought and sold 39 farms and other property over the years. In his retirement years, he enjoyed trips to the casino, playing cards, dancing, and watching the Twins. And always when family got together there was a spirited poker game played with a 'boofer' or two at the end of the night. He was a hard-working, wise, and generous father and grandfather. He was a loving grandpa who was happy to see his grandchildren and always had a dollar to tuck into their pockets. He was so proud of all of them and their accomplishments.

Survivors include his five sons, John Jr. of Urbank, Daryl of Golden Valley, Mike (Donna) of Urbank, Patrick of Brandon, and Greg (Linda) of Brandon; two daughters, Dianne Hockert of Eden Prairie and Shelley (Jeff) Parkin of Alexandria; 16 grandchildren; 26 great-grandchildren (with one due in August); two sisters, Rose (Ben) Stich of Brandon and Florence Fruth of Brandon; nieces, nephews and other family and friends.

To order memorial trees or send flowers to the family in memory of John Koep, Sr, please visit our flower store.
Send a Sympathy Card