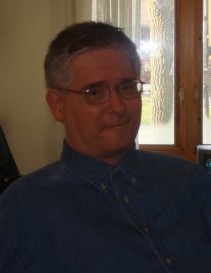 Jeffrey John Dahl was born July 20, 1963, to John and JoAnn (Buelow) Dahl in St. Cloud.  He was baptized at Holy Cross Lutheran Church and confirmed at Atonement Lutheran Church.  He attended public schools and graduated from Apollo High School in 1981.  He graduated from St. Cloud State University in 1986.  Following his education, he worked for Toys R Us in St. Cloud, was a proof reader for a Sherriff’s Magazine in the Twin Cities and taught Chess for St. Cloud Community Education. Jeffrey moved to Alexandria in 2009, and worked part time at Alexandria Opportunity Center.   He was a former member of Atonement Lutheran Church and was Vice-President of the Minnesota State Chess Association.  Jeffrey enjoyed playing war games and was a movie buff with a collection of his favorite movies.  He was a Grandmaster chess player and avid history buff as related to WWII.

He was preceded in death by his paternal and maternal grandparents.

Jeffrey is survived by his parents, John and JoAnn Dahl of Alexandria; brother, Jason Dahl of St. Peter; along with many cousins and a host of friends.

Honorary pallbearers are his family and friends.

To order memorial trees or send flowers to the family in memory of Jeffrey Dahl, please visit our flower store.