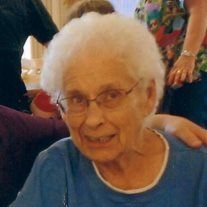 Jeanette Marie Hardekopf was born March 20, 1931, to Mike and Mary Chovan in Minneapolis. Following her graduation from Roosevelt High School, she attended Fairview School of Nursing in Minneapolis. While doing her nursing internship at Fergus Falls State Hospital, she met Leonard Hardekopf. They were united in marriage February 3, 1951, in Minneapolis. Jeanette worked at the Parkers Prairie Hospital as a RN and Hospital Administrator for many years. Following the closing of the hospital, she worked at the Parkers Prairie Clinic until she retired, after working in nursing for over 50 years. Jeanette moved to the Minnewaska Lutheran Home in Starbuck in 2011

She was preceded in death by her parents; husband, Leonard in 2009; great-granddaughter, Hailey and brother, Robert Chovan.

To order memorial trees or send flowers to the family in memory of Jeanette Hardekopf, please visit our flower store.
Send a Sympathy Card