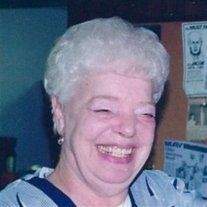 Jeanette Ann Beninga was born May 29, 1931, to Theodore and Clara (Austing) Niehaus in Richmond, Minnesota. She moved with her family to the Perham area where she attended grade school at St. Joe Country School. Jeanette graduated from Perham High School in 1949. Following her education, she moved to Minneapolis where she worked at Hydrahose for many years. She was united in marriage to Herbert R. "Bud" Beninga November 30, 1968, at St. Mary's Church in Minneapolis. Following their marriage they made their home in Minneapolis and she worked as a dog groomer. Following their retirement in 1994, she and her husband moved to Parkers Prairie, where she lived until her death. Her hobbies included fishing with her family, playing word search and crossword puzzles and collecting Snow Babies and Boyds Bears.

Jeanette is survived by her sister, Bernice (Anthony) Fiedler of Henning; nieces, nephews and their families.

She was preceded in death by her parents; three sisters; seven brothers; and her husband, "Bud" on December 18, 2007.

To order memorial trees or send flowers to the family in memory of Jeanette Beninga, please visit our flower store.