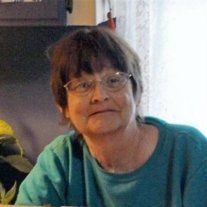 Memorial services will be held 2:00 p.m., Saturday, March 9, 2013, at Lind Family Funeral Home in Miltona with Pastor Andrea Olson officiating. Music will be provided by Andy and Kelsey Kaasa and Paul Hartmann, II.

Visitation will be 6-8 p.m., Friday at the funeral home and continue one hour prior to the service.

Janet Elsie Makela was born June 24, 1953, to Ivan and Dorothy (Synstelien) Kaasa in Fergus Falls. She was raised on the family farm in Dalton and graduated from Ashby Public School in 1971. She was united in marriage to Stan Makela on February 26, 1972, at Our Saviors Lutheran Church in Dalton. Following their marriage, they lived in Dalton for many years. Janet worked for her father at Jerry's Bar in Dalton. Later, she worked in Public Health and Human Services for many years, including the State Hospital in Fergus Falls, St. William's Annex in Parkers Prairie and as a social security advocate with Disability Specialties Inc. She retired from Prairie Community Services in Alexandria. She and her husband have lived in Miltona the past 12 years. Janet enjoyed sewing, gardening, baking, reading, flowers and collecting frogs. She was a championship pool player and loved playing Wii bowling.

She was preceded in death by her maternal and paternal grandparents; father, Ivan Kaasa; and infant sister, Marie Kaasa.

The urn bearer will be her husband, Stan.

To order memorial trees or send flowers to the family in memory of Janet Makela, please visit our flower store.
Send a Sympathy Card