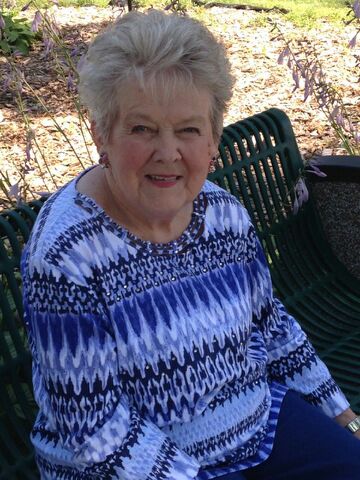 Jacqueline “Jackie” Carol Friese, age 82, of Rose City, went peacefully home to Jesus, her Savior, Monday, July 18, 2016.  She was surrounded by her loving family and a caring staff during her last weeks at Knute Nelson Care Center.  Set free after a valiant battle with Alzheimer’s Disease, our dear mother is now at rest.

The visitation will be 6-8 p.m., Thursday at Faith Lutheran Church and continue one hour prior to the service.

Jacqueline was born December 16, 1933, to Edward and Christine (Luckason) Redalen in Lanesboro, Minnesota. She was baptized and confirmed at Bethlehem Lutheran Church in Lanesboro.  Jackie graduated with honors from Lanesboro High School in 1951.  She studied for her Registered Nursing degree at Methodist-Kahler School of Nursing, in Rochester with pediatric rotations at Cook County Hospital, Chicago and obstetrics at the University of Chicago Hospital, Illinois.  Jackie later worked at Cambridge Hospital, in Princeton.  Jackie was united in marriage to Donald “Donnie” Duane Friese on February 27, 1954, at Bethlehem Lutheran Church in Lanesboro.  She was the perfect help-mate for Donnie, loving, gracious, industrious, hard-working, and his constant advocate.  Jackie and Donnie began their married life farming in the Wanamingo area until later moving to Princeton where they raised turkeys.  Rearing their young family, they lived in several towns in south-eastern Minnesota where Donnie worked various trades. In 1967, the family moved to Guthrie, Oklahoma where Jackie’s devoted care for their large family lent support to Don’s work with Curtiss Cattle Breeding Service, Inc.  Jackie and Donnie were active members of the community and Zion Lutheran Church. They gained many life-long friendships during their five year residence.  In May of 1972, the family returned to Minnesota and settled in the Rose City area, where they focused again on dairy farming. Jackie and Don also owned and operated Eagle Lanes Bowling Alley in Eagle Bend for three years.  Never ones to retire, Jackie and Donnie’s active involvement in their local community well into their latter years brought great joy and satisfaction, with many treasured friendships.

Pretty, petite and energetic, Jackie was an excellent wife, mother and homemaker.  She took great pleasure in providing for her family through gardening, canning and cooking.  Her homemade bread, pies and cookies are legendary among family.  A gracious hostess, she was always ready with coffee and dessert for visitors.  Jackie is remembered for her love and esteem of country life.  She particularly enjoyed hikes in the woods and maintaining their prized farm site, never letting a stray stick or weed escape her eye.  Jackie was admired for her beautiful flower beds and abundant garden produce.  Uniquely, Jackie would not drive a car, but took to driving a golf cart in her seventies.  She enjoyed traveling to visit family, reading, playing cards, and beautiful music.  She especially loved children and cherished time with grand and great-grandchildren.  Jackie was a member of Rose City Evangelical Free Church.  She taught Sunday School and was a member of the Free Church Women’s Ministries.  She also served faithfully at the annual Rose City Threshing Festival.  Jackie drew people to her with her sweet smile and the sparkle in her eyes.  A pearl of great value, she will always be remembered for her kindness, gratitude, service to others, love of family and her deep faith in the Lord, Jesus Christ.

She was preceded in death by her beloved husband of 58 years, Donnie (May 20, 2012);  parents; and infant granddaughter, Leah Pribula.

The family would like to thank the many kind caregivers of The Pines, Knute Nelson Care Center; Hospice of Knute Nelson; Prairie Senior Cottages, Hutchinson; and Bridgewell Memory Care, Osakis.  Donations can be made to these facilities in Jackie’s name.  Gratitude also goes out to Lind Family Funeral Services.

To order memorial trees or send flowers to the family in memory of Jacqueline Friese, please visit our flower store.
Send a Sympathy Card