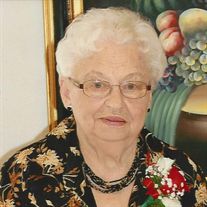 Visitation is 5-8 p.m., Friday at Immanuel Lutheran Church in Parkers Prairie and will continue one hour prior to the service at the church.

Irene Ida Brunson was born at home February 27, 1923, to William and Ottilie (Brueske) Schramm in Parkers Prairie Township. She was baptized April 15, 1923, and confirmed June 27, 1937, at Immanuel Lutheran Church. She attended country school until she began working at area resorts. She was united in marriage to Vincent Brunson on March 12, 1942, in Parkers Prairie. Following their marriage they lived on the Brunson family farm where they raised their family. They sold for Jacques Seed Company earning many trips, including Hawaii, the Mediterranean, Mexico, Florida, California, Texas, Washington D.C. and several cruises. Vincent died on May 19, 1981. Irene moved into Parkers Prairie in 1986. She was a member of Immanuel Lutheran church and the Ladies Aid. She was a volunteer for the Senior Citizen Center and the bingo booth at the annual Parkers Prairie Fall Festival. She loved traveling, shopping, playing cards, dancing, crocheting, quilting, reading and fishing. She was a loving and caring mother and grandmother.


To order memorial trees or send flowers to the family in memory of Irene Brunson, please visit our flower store.