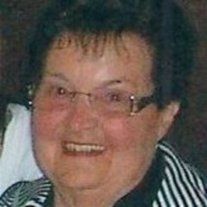 Funeral services will be held 12:00 noon, Wednesday, October 10, 2012, at Faith Lutheran Church in Miltona with Rev. Ken Thiele and Rev. Steve Olson officiating. Music will be provided by organist, Kevin Lee and Dedra Zwieg as vocalist. Burial will take place at Sunset Memorial Cemetery in Montevideo.

Idell Margaret was born October 2, 1930, along with her twin sister, Eileen, to Oliver and Ellen (Nelson) Anderson in Montevideo, Minnesota. She was baptized at Bruno Lutheran Church and confirmed at Our Savior's Lutheran Church both in Montevideo. She attended country school and graduated from Montevideo High School in 1948. Following her education, she worked as a dental assistant. She was united in marriage to Richard "Dick" Eid on May 27, 1951, at Our Savior's Lutheran Church in Montevideo. Following their marriage, they farmed in rural Montevideo where they raised their family. In addition to farming, Idell worked at various retail stores and as a teacher's assistant at Montevideo High School. After retirement, she and her husband moved to live on Lake Miltona and spent winters in Mesa, Arizona. Idell was active in Homemakers Club, church women's groups and golf leagues in both Miltona and Mesa. She was a member of Faith Lutheran Church and WELCA in Miltona. Idell enjoyed spending time at the lake with her children and grandchildren, golfing, shopping, dancing and playing cards. She was an avid baker and was famous for her chocolate chip cookies.

She was preceded in death by her parents and sister-in-law, Norma Anderson.

To order memorial trees or send flowers to the family in memory of Idell Eid, please visit our flower store.
Send a Sympathy Card