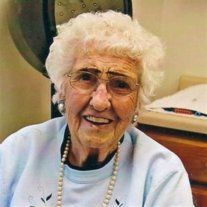 Hilda A. Cordes, age 97 years, 11 months, 21 days, of St. William's Living Center, Parkers Prairie, left her earthly life and entered the Kingdom of Heaven to begin her new life with her Lord and Savior. "Well done good and faithful servant . . . "Be faithful unto Me until death and I will give you the Crown of Life." Revelations 2:10

Funeral services will be held 11:00 a.m., Wednesday, February 13, 2013, at Mt. Calvary Lutheran Church in Miltona with Rev. William Stockman officiating. Music will be provided by her granddaughter, Deb Joachim. Burial will take place at the church cemetery.

Visitation will be 4-7 p.m., Tuesday at Mt. Calvary Lutheran Church in Miltona and continue one hour prior to the service at the church.

Hilda Augusta Anna Freda Mundt Cordes was born February 16, 1915, to Herman and Elizabeth (Krueger) Mundt in St. Paul, Minnesota. She was baptized March 7, 1915, and confirmed in April of 1928, at Emanuel Lutheran Church in St. Paul. Hilda graduated valedictorian from Eighth Grade at Emanuel Lutheran Church School, June 14, 1928. She completed high school in South St. Paul in June of 1932. Hilda was united in marriage to Clifford Herman Cordes June 25, 1932, at Emanuel Lutheran Church in St. Paul. Cliff and Hilda raised vegetables on their farm in Inver Grove Heights. Hilda worked at Central Livestock and Fitch Interstate from 1958, until her retirement in 1971. In 1971, Cliff and Hilda moved to Park Ridge Resort on Lake Miltona and resided there until 1998, when they moved into Miltona. Hilda was a member of Mt. Calvary Lutheran Church and was also active in its Ladies Aid. Hilda served on the Douglas County Committee of Aging and also the West Central Area on Aging. Hilda was enrolled in the Older American Hall of Fame for Outstanding Service by the Miltona Senior Citizens. Hilda loved fishing for sunfish with Cliff on Lake Miltona and playing cards with her family and friends. She also loved playing Bridge with her Bridge group. Hilda moved into St. William's Assisted Living February 1, 2002, and into the Living Center in 2005. Hilda could be found reading the Bible to her friends at St. Williams every Wednesday at 6:30 p.m., until her health began to fail in 2012. Hilda's faith was a strong influence in her life. "Delight thyself in the Lord; And He shall give Thee the desires of thine heart," Psalm 37:4, Hilda's confirmation verse.

Hilda was preceded in death by her parents; husband, Clifford in 1999, daughter, Marlyne Wollschlager in 2012; granddaughter, Jody Lynn Cordes in 1961; a sister and three brothers.

To order memorial trees or send flowers to the family in memory of Hilda Cordes, please visit our flower store.
Send a Sympathy Card