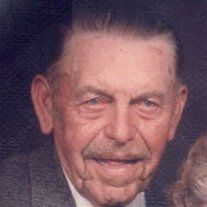 Herbert E. Hartfiel, age 97, life-long resident of the Parkers Prairie area, went to be with his precious Lord, Saturday, February 23, 2013.

Visitation will be one hour prior to the service.

Herbert Emil Hartfiel was born January 8, 1916, to Fred and Anna (Zarbok) Hartfiel on the Hartfiel homestead in West Miltona. He was baptized and confirmed at St. Paul's Lutheran Church in West Miltona. Herb farmed the family home farm in West Miltona. He was united in marriage to Elaine Grulke June 9, 1947, in Little Falls. Herb loved farming and his related interests were sheep, beehives and John Deere tractors. Following retirement, Herb and Elaine moved to a small farm near Lake Miltona. They enjoyed many travels, visiting friends and family and were always anxious to see what was just "around the next bend". When his wife, Elaine developed serious medical problems, Herb took care of her at home as long as he was able and in 2003, she moved into St. William's Living Center. He soon joined her in 2004, and continued living there until the time of his death. His wife, Elaine died February 9, 2004. Herb was a life-long member of St. Paul's Lutheran Church. Herb will be dearly missed by all who knew him.

He is survived by his sister, Adeline Krohnfeldt of Colorado Springs, Colorado; sister-in-law, Meta (Richard) Schempf of Clarkston, Michigan; several cousins; numerous nieces and nephews; along with many friends.

He was preceded in death by his parents; wife; two sisters, Heartha Nack and Adelia Nack; and three brothers-in-law, Roy Nack, Glenn Nack, and Ruben Krohnfeldt.

To order memorial trees or send flowers to the family in memory of Herbert Hartfiel, please visit our flower store.
Send a Sympathy Card