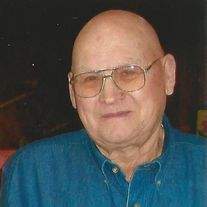 Visitation will begin at noon, two hours prior to the service at the church.

Harry Schoewe Riedel was born July 15, 1933, to Harry and Violet (Schoewe) Riedel in Starbuck, Minnesota. He was baptized August 13, 1933, at Holmes City and confirmed May 12, 1946, at Miltona. Harry attended grade school in Farwell, Hazel Hill and Leaf Valley, high school at Morris Ag School, 1947-1950, and graduated from Parkers Prairie High School in 1951. Following his education, he served in the U.S. Air Force where he was stationed in Florida, Iceland, Japan and Great Falls, Montana. Following his honorable discharge, he returned home and began farming at Leaf Valley. He was united in marriage to Lorraine Kalpin September 30, 1956, at Ebenezer Lutheran Church in Leaf Valley. Following their marriage they continued farming in Leaf Valley until 1982, at which time they farmed in Parkers Prairie until retirement in 1997. He was a member of Immanuel Lutheran Church, former member of Ebenezer Lutheran Church, Leaf Valley Creamery Board, Leaf Valley Fire Department, Miltona Co-op Store Board, and the Parkers Prairie American Legion Post #219. Harry was a mechanic and could fix anything. He enjoyed carpentry, woodworking, fishing, and playing cards. Harry especially enjoyed playing with his grandkids and attending their various activities. He will be dearly missed.

Urnbearer is his son, Pat Riedel.


To order memorial trees or send flowers to the family in memory of Harry Riedel, please visit our flower store.