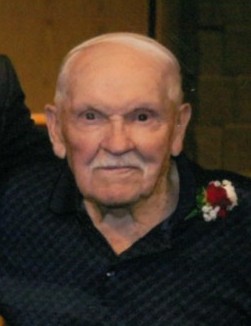 Visitation is 5-7 p.m., Sunday, at Lind Family Funeral Home in Parkers Prairie and will continue one hour prior to the service at the church.

Harold William Diedrich was born on July 17, 1926, to William and Wilhelmina “Minnie” (Kalpin) Diedrich on the family farm in Leaf Valley Township. He attended Country School through the eighth grade. Harold was drafted into the U.S. Army on February 1, 1945, and served until his honorable discharge on November 28, 1946. He was united in marriage to Bernice Grothen on November 16, 1947, at St. Paul's Lutheran Church Parsonage in West Miltona. The Monday following their marriage they moved to Fargo, North Dakota and Harold began working for a meat packing plant. They returned six months later to the Brockopp family farm in Otter Tail County where they farmed and started a herd of dairy cows. They purchased the Dreger family farm in 1955, and lived and farmed there until their retirement in 1992. Following their retirement, they moved to Miltona and in 1993, Harold started his rug business named “Rags to Rugs.”  He also started working for Kinkead Cemetery in Alexandria in 1994. He was a member of St. Paul’s Lutheran Church, West Miltona and the Miltona VFW Post 7826. Harold enjoyed hunting, fishing, and cutting wood. He especially enjoyed playing cards, making rugs, baking, canning and freezing vegetables.

Harold is survived by his two sons, Michael (Terry) Diedrich of Garfield and Kelly (Michelle) Diedrich of Parkers Prairie; three daughters, Karen Diedrich of Miltona, Brenda (David) Aydelotte of Cumberland, Maryland and Susan (Barry) Ness of Alexandria; three sisters, Gladys Wunderlich and Marlene Bjorstrom both of Miltona and Caroline (Leon) Schultz of Garfield; 17 grandchildren; 18 great-grandchildren; a great-great-granddaughter; along with his large extended family and many friends.

To order memorial trees or send flowers to the family in memory of Harold Diedrich, please visit our flower store.