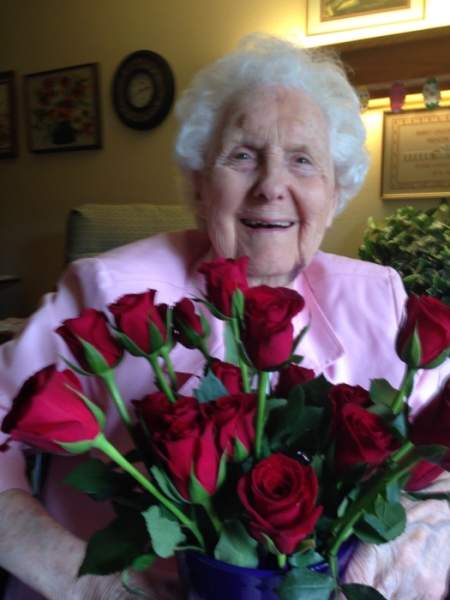 Grace was born July 12, 1919, to Arnt and Mary Baker of Eau Claire, Wisconsin, where she grew up with her sisters, Elizabeth and Elsie. She always spoke fondly of the hardworking, firm, yet loving upbringing her parents provided. Going to church and Sunday School and the daily witness of her parents and her beloved aunts, Olga and Ida, planted roots of deep faith in her.  Baking bread, piano lessons and sewing clothes strengthened the work ethic in her. Walks to the park with her dad and sisters while eating ice cream cones became a favorite summer activity. Sledding and ice skating were highlights in the winter. She studied hard in school and worked as a lifeguard on the beaches of the Chippewa River. She graduated in 1941, from St. Olaf College of Northfield, Minnesota with a music and history major as well as an elementary education degree. After college Grace was a parish worker at Grace Lutheran Church in Eau Claire, where she met Luther Seminary intern, Irvin Tweet. They were married New Year’s Eve 1944, following their marriage they served Lutheran congregations in the states of Washington, Oregon and California. In November of 1969, Irvin accepted a pastoral call through Lutheran World Federation, to Cape Town, South Africa. Together with three of their four daughters, Irvin and Grace set sail on a sixteen-day voyage from New York to Cape Town. In the hull of the ship was their 1968 Chevy Impala, their furniture and all their earthly belongings. In Cape Town, they served Strand Street Lutheran Church that had been established by the Germans in 1793. They went on to serve parishes in Durban and Port Elizabeth, South Africa. In her life-time she had many opportunities to travel abroad. Her husband, Rev. Irvin Tweet, who lovingly referred to his wife, “Amazing Grace”, died January 18, 1999, after 53 years of marriage.  Grace married Pastor Morris Ulring, a classmate of Irvin’s from Luther Seminary, and they enjoyed 13 years of marriage before his death on February 5, 2016.

She was preceded in death by her parents; husbands, Irvin Tweet and Morris Ulring; and sisters and brothers-in-law, Elizabeth (Bill) Duerst and Elsie (George) Brunner.

Play the video below to hear Grace play piano recorded at St. Olaf College in 2002 when she was 85 years old. She played these songs from memory, one after another, without pause.

To order memorial trees or send flowers to the family in memory of Grace Tweet Ulring, please visit our flower store.