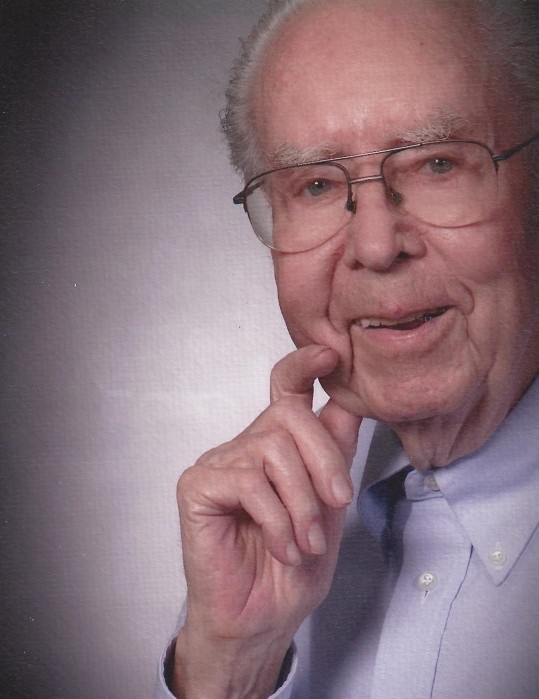 Gordon Alvin Hendrickson was born on October 3, 1925, to Elmer and Audrey May (Herington) Hendrickson in Bagley, Minnesota. He attended Brainerd Public Schools until his graduation in 1943. Following his education, Gordy served in WWII facing battle across Europe. He earned his Private 1st Class ranking and bronze star medal for bravery during his enlistment. Following an honorable discharge, he returned home and worked at a nearby paper mill. Gordy ventured to St. Louis Park where he worked as an operations manager for Sears, Roebuck & Co., in Minneapolis. He was united in marriage to Genevieve “Gen” Thompson on September, 6, 1973. The couple moved to Chicago for their jobs and Gordy retired in 1980. They moved to the Glenwood/Alexandria area. Gordy was currently a resident of Grand Arbor in Alexandria. His hobbies included hunting, fishing, and gardening. He was a member of Indherred Lutheran Church and Shalom Lutheran Church. Gordy was also a member of the VFW Post 4582 in Starbuck and formerly a Lions Club Member in Glenwood.

He was preceded in death by his parents; wife, Gen; and three brothers, Alfred, Kenneth “Bud”, and Don Hendrickson.

Gordy is survived by his two sons, Tom (Valentina) Hendrickson of Ramsey and Bob (Ginny Renslow) Hendrickson of Glenwood; sister, Ellen (George) Honek of Moorhead; two grandchildren, Kristen (Tyler) Perleberg and Brodie Hendrickson; and many nieces and nephews and other relatives.

To order memorial trees or send flowers to the family in memory of Gordon "Gordy" Hendrickson, please visit our flower store.