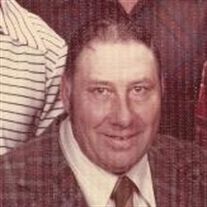 Visitation begins 4 p.m., and concludes with 7 p.m., parish prayers and Christian Mother's Rosary, Tuesday at the church. The visitation will continue one hour prior to the service at the church.

Gordon Maximillion Schmidt was born January 18, 1926, to Ferdinand and Christina (Blashach) Schmidt in North Effington Township. He was baptized and confirmed at Sacred Heart Catholic Church. He attended Country School District #1466, through the eighth grade. Gordon and his brother, Donald took over the family farm after losing their father at a young age. He was united in marriage to Arlene Trisko August 7, 1951, at St. Nicholas Church in Belle River. He worked as a spike-driver on the railroad for a short time and then rented out a few area farms before taking over the family farm in 1958. The Schmidt family farm became a century farm in 1985. It was homesteaded by Gordon's great-grandfather, George Schmidt in 1885, who immigrated from Germany. He worked and lived on the farm until he moved into St. Williams Living Center in January 2003, following heart surgery. Gordon was not able to return to his farm, and as a result, his son, Joe took over running it. He was a life-member of Sacred Heart Church. Gordon loved the country life and would drive his pick-up truck around the country side looking at the fields to see how neighbor's crops were growing. He was very proud of his animals and enjoyed his cattle and team of work horses, Molly and Birdie. He loved hunting and fishing, especially, spearing in the winter. He enjoyed his friends at Shysters and the Ponderosa where he played a good game of pool or cards. Gordon's family was important to him, and he took them fishing, often spending more time untangling their lines than fishing himself. He enjoyed cooking, whether a roast or wonderful soup and taught his kids to cook. Gordon knew and enjoyed a lot of people. He had a good sense of humor and could tell a good joke or play a little trick. He will be dearly missed by his children, grandchildren and great-grandchildren.

He was preceded in death by his parents; brothers, Edward Schmidt and Donald Schmidt; sisters, Helen Bjerketvedt, Justine Thoennes, Loretta Ritten and their spouses; and wife, Arlene, after 62 years of marriage died July 17, 2014.


To order memorial trees or send flowers to the family in memory of Gordon Schmidt, please visit our flower store.