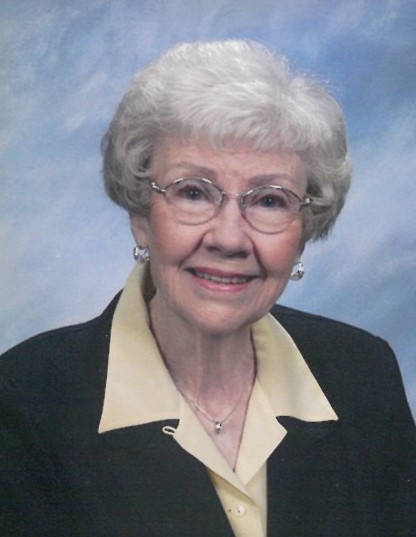 Gladys June Larsen (Kruse), age 96, passed away on July 6, 2017, in Alexandria, Minnesota at Knute Nelson Care Center.  Although she was a life-long resident of the Alta-Storm Lake communities, she moved to Minnesota in 2010, to Nelson Gables, an assisted living facility, to be closer to her family.  She moved into Knute Nelson Care Center last December as her needs required.

Gladys was born on Oct. 7, 1920, to Charlotte (Carlberg) and Axel Kruse on a farm north of Alta, Iowa.  She attended Fairview Consolidated School and later graduated from Alta High School in 1938.  In 1939, she graduated from Sioux City Beauty Academy and took her first job in Denison, Iowa, where she met and married the “love of her life”, James Larsen, on April 12, 1943.  On Jim’s return home from WWII, they settled first in Storm Lake,  then, later Alta, Iowa, where they raised their two daughters, Linda and Nancy.  Gladys owned and operated a beauty shop in Storm Lake for 30 yrs., retiring in 1982, due to Jim’s failing health.

In her earlier years, Gladys loved to bowl, golf, garden and feed the squirrels and birds.  She was a life-long member of Trinity Lutheran Church in Alta, as well as an active participant in the Ruth women’s group, helping with various workshops and volunteering.  She was a charter member of the Alta Chapter O.E.S. #138 Eastern Star.  The “We Care” (grief support for spouses) was also a joy to her in her retiring years.

Gladys, a woman of faith, will be long remembered for her engaging smile, her devotion to her family and friends, the enjoyment she found in living each day.  She was truly the epitome of “a lady”!

To order memorial trees or send flowers to the family in memory of Gladys Larsen, please visit our flower store.
Send a Sympathy Card