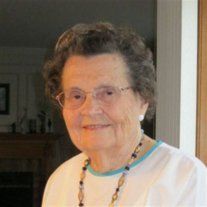 Visitation will be 5-8 p.m., Friday at Lind Family Funeral Home in Parkers Prairie and continue one hour prior to the service at the church.

Gladys Lauretta Hedeen was born November 22, 1919, to Fred Richard "Dick" and Eleanor (Hainzl) Lindstrom in Carlos Township, Minnesota. She was the second child born into this marriage, her sister, Viola, first and then two brothers, Harold and Fred. She attended a one-room country school in District #77, and the Alexandria High School, graduating in 1937. She and her sister were in the same class from grade 1-12. They also attended the Minnesota School of Business in Minneapolis together. Following her education, Gladys got a job at Strutwear Knitting Company in Minneapolis and then the Twin Cities Ordinance Plant in New Brighton. She was united in marriage to Robert F. Bond January 17, 1942, in Stillwater. They moved to Los Angeles, California where their two sons, Milton and Gary were born. Later, she and her two boys returned to the home farm in Carlos Township. She was baptized and confirmed in the Lutheran faith by Rev. Karl Ansorge and then united in marriage to Elmer Ost July 2, 1950. To this union, two children, Allen and Debra were born. She was a hard working farmer's wife, dedicated nurse's assistant at Parkers Prairie Hospital and especially, devoted and loving wife and mother. In addition to caring for her family, she enjoyed gardening and sewing. Elmer died in 1989, following a long struggle with cancer. She was united in marriage to Lawrence "Cliff" Hedeen June 22, 1991, at Immanuel Lutheran Church by Rev. Kirk Lee. Gladys and Cliff split their time between Mesa, Arizona and Parkers Prairie and enjoyed many opportunities for golfing and traveling. They relocated to Windmill Ponds in Alexandria in 2009, and her husband, Cliff died in 2010. Gladys was a member of Immanuel Lutheran Church where she participated in many activities including, Bible Class, LWML and teaching Sunday School for 20 years. Her church affiliation was an important part of her life and she enjoyed the many friendships made there. Her faith in the Lord comforted her and helped her through the many trials in her life.

She was preceded in death by her parents; and husbands, Robert Bond, Elmer Ost and Cliff Hedeen.

To order memorial trees or send flowers to the family in memory of Gladys Hadeen, please visit our flower store.
Send a Sympathy Card