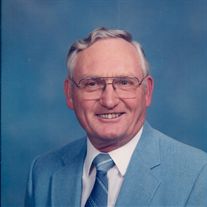 Visitation is 5-8 p.m., Friday, at Immanuel Lutheran Church and will continue one hour prior to the service.

Gilmore Harold Jahnke was born March 20, 1931, to Otto and Laura (Jantzen) Jahnke in North Effington Township. He was baptized April 21, 1931, and confirmed July 8, 1945, at Zion Lutheran Church - North Effington by Pastor Schamber. He attended country school and graduated from Parkers Prairie High School in 1949. He attended Drews Business College in St. Cloud through Helping Hands. Following his education, he worked for Gib Antonson on his farm and drove truck. He served in the U.S. Army until his honorable discharge. He was united in marriage to Sharon Schackman October 19, 1952, at Park Rapids. Following their marriage, they lived in Parkers Prairie where they raised their family. Gilmore worked at the filling station and as transport driver for Penrose Oil Co. for many years. His wife Sharon, died September 9, 1982. Gilmore was united in marriage to Joyce (Huwe) Gappa June 23, 1985, at Immanuel Lutheran Church. Gilmore worked for Dahlen Transport of Alexandria until he retired in 1994, then drove school bus for many years. He was an active member of Immanuel Lutheran Church where he served as an elder, trustee, tape ministry, choir and played on the dart ball team. He was a member of the Parkers Prairie Lions and American Legion Post #219. He enjoyed being at the lake, fishing and long car rides looking at the fields and for deer. He loved helping others and was an avid supporter of the Panther girl's basketball team. Blessed be his memory.

He is preceded in death by his parents; first wife, Sharon; and brother, Orvin.

To order memorial trees or send flowers to the family in memory of Gilmore Jahnke, please visit our flower store.
Send a Sympathy Card