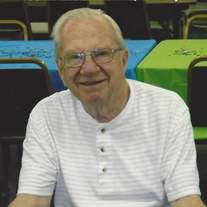 George Valarie Keehn was born on August 18, 1920, to Ruben and Mary (Frantz) Keehn in Duluth. He was baptized and confirmed in the Catholic faith. He attended Duluth Public Schools and graduated from Denfeld High School. Following high school he was drafted into the United States Army and was sent to Georgia Tech for a Chemical Engineering degree. He was later stationed on Amchitka, Aleutian Islands for the rest of his military career. Following his honorable discharge he lived in LaCrosse, Wisconsin where he worked for an electrical company. George was united in marriage to Helen "Babe" Neff on May 9, 1952, in Mason City, Iowa. They moved to St. Paul where he worked for General Electric until 1955. George and Babe moved to Alexandria where he worked as a salesman and manager for Minnesota Electric for 35 years. George was a member of the Church of St. Mary and Alexandria American Legion Post #87. Since retirement he has enjoyed golfing, fishing, camping, hunting, and traveling. He especially loved spending time with his family. Most people described George as a kind, gentle, and humble man.

He was preceded in death by his parents; and brother, Greg Keehn.

To order memorial trees or send flowers to the family in memory of George Keehn, please visit our flower store.