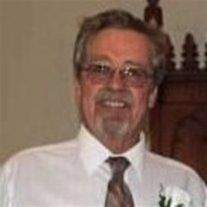 Visitation will be 5-8 p.m., Thursday at Lind Family Funeral Home in Parkers Prairie and continue one hour prior to the service at the church.

Gary Lee Olson was born December 17, 1949, to Harris and Della (Conn) Olson in Bertha, Minnesota. He was raised by his grandmother, Emma, on the Olson family farm in Parkers Prairie. He attended country school and graduated from Parkers Prairie High School in 1968. Following his education, he was drafted into the U.S. Army where he served in Vietnam with the 84th Battalion Engineers. He was wounded on October 23, 1969, and continued serving in Korea until his honorable discharge in 1971. He received two Purple Hearts, a Bronze Star and Combat Infantry Badge. He was united in marriage to Anita Darlene Lucas October 9, 1970, in Pikeville, Kentucky. Following his honorable discharge, they returned to Parkers Prairie where they raised their family. Gary owned/operated a trucking business with the support of his father, Harris, driving throughout North America for 12 years. He drove gas truck for 15 years out of Alexandria before finishing his education via the G.I. Bill at Alexandria Technical College in Small Engine Repairs. He worked for Fortwengler Electric in Parkers Prairie until his retirement in 2009. Gary was a member of First Evangelical Lutheran Church, N.R.A., United We Stand America and the Parkers Prairie American Legion Post #219, where he was Sergeant at Arms and served as Honor Guard for many funerals through the years. He enjoyed hunting, fishing, tinkering on small engines and riding/fixing motorcycles.

He was preceded in death by his parents; wife, Darlene on November 17, 1998; grandson, Chance; and sister, Nancy Severson.

To order memorial trees or send flowers to the family in memory of Gary Olson, please visit our flower store.