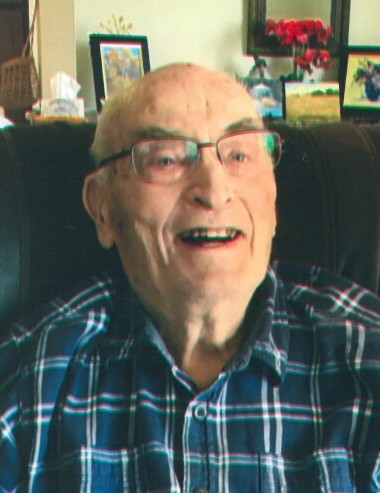 Fraye Eugene was born on March 8, 1934, to Elmer and Minnie (Dahlquist) at the hospital in Warren, MN. Their family farm was located outside of Alvarado, MN . He attended the country school until 8th grade and then continued his education at Alvarado High School where he graduated and lettered in baseball, basketball and football. Fraye married Pauline Johnson in May of 1953. Fraye mentored under his father-in-law to learn the electrical business. He later on became a Master electrician. Fraye and Pauline with their five kids moved to the Iron Range where Fraye continued to work as an electrician. In 1968 the family moved to White Bear Lake, MN.  They moved back to the Alvarado to take over the family farm when his father passed away in 1980. Fraye’s wife Pauline passed away and he was remarried to Jean Johnson in 1986.  Fraye was involved in Stephens Ministry, the Lions club of Alvarado, a founder of the White Bear Lake Umpires Association and a long standing member of Immanuel Lutheran Church of Vega. Fraye loved to sing, especially in his church choir. His hobbies included skeet shooting, raising dairy goats, and hunting with his family.

To order memorial trees or send flowers to the family in memory of Fraye E. Ranstrom, please visit our flower store.
Send a Sympathy Card