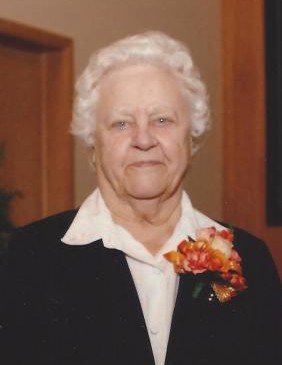 Floretta Anita Ziegelmann was born on June 10, 1926, to Fred and Vivian (Duberowski) Kalpin in Alexandria.  She was baptized July 2, 1926, and confirmed June 30, 1940, at Ebenezer Lutheran Church.  She grew up on the family farm in Leaf Valley Township and attended Country School District #59, through the eighth grade. A favorite memory was driving to her Uncle Emil’s farm to milk cows with her brother, Laverne, and singing, “In the Hour of Trial”.   Floretta was united in marriage to Gilbert Ziegelmann on October 5, 1947, at Ebenezer Lutheran Church.  Following their marriage, they were blessed with three daughters.  Together they farmed in Leaf Valley for 51 years, Floretta was an active homemaker and enjoyed raising chickens and selling eggs, berries and homemade baked goods. She also cleaned cabins at Lucky Acres on Lake Miltona.  Floretta enjoyed playing the guitar and loved music, sharing her gift as a church choir member over 50 years and singing for special occasions.  She was an active member of Ebenezer Lutheran Church, its Ladies Aide, LWML, and Sunday School teacher.  She was a member of the American Legion Inspiration Peak Auxiliary, Homemakers Group and was Secretary and Treasurer of AAL and the Leaf Valley Senior Citizens. She enjoyed cards, gardening and embroidery.  Floretta will be remembered for being a gentle, loving, kind, giving and humble person.

She was preceded in death by her parents; husband, Gilbert in 2007; son-in-law, Wayne Korkowski, and brother, Laverne Kalpin.

To order memorial trees or send flowers to the family in memory of Floretta Ziegelmann, please visit our flower store.
Send a Sympathy Card