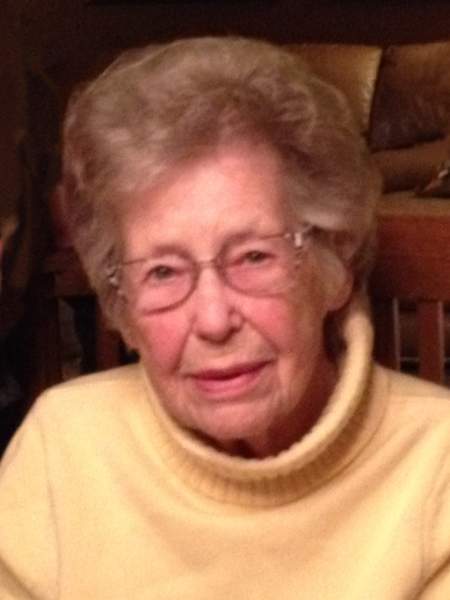 Faye J. Lind Wallace, age 97, formerly of Moline, Illinois, died Wednesday, August 29, 2018, at her son and daughter-in-law’s home in Alexandria under the care of Hospice of Douglas County.

A local visitation will be held from 10 a.m. until the 11 a.m. prayer service at St. William’s Center Chapel in Parkers Prairie on Tuesday, September 4, 2018, with Rev. Rachel Stout officiating. A second visitation will be held from 4 p.m. until the 7 p.m. prayer service at Lind Family Funeral Home in Alexandria on Tuesday, September 4, 2018, with Rev. John LeVahn officiating.

A funeral service will be held at 11 a.m., Friday, September 7, 2018, at Salem Lutheran Church in Moline, Illinois with Pastor Randy Willers officiating. Music is provided by pianist, Ashley Lind. Burial will take place at Rock Island National Cemetery.  The visitation in Moline will be held 5-7 p.m., Thursday, September 6, 2018, at Esterdahl Mortuary, 6601-38th Avenue, Moline, Illinois.  The visitation will continue one hour prior to the service at the church.

Faye Joyce (nee Harter) Lind Wallace was born May 21, 1921, to Roy and Martha (Pederson) Harter in Trenton, Missouri. She was baptized in Trenton and confirmed at Trinity Lutheran Church in Moline, Illinois. She grew up in Moline where she graduated from Moline High School in 1939. She attended Augustana College from 1940-1941, and then began working as editor/photographer of the International Harvester Magazine, “Pick It and Thresh It” from 1942-1945. She was united in marriage to her high school sweetheart, Richard A. Lind, following his honorable discharge from the U. S. Army, on December 15, 1945. Following their marriage, they lived in Moline where she was a homemaker and raised their four children. Faye completed her Associate’s Degree from Black Hawk College in 1974. Following her education, she worked as secretary to the Director of Community Services at Black Hawk College until she retired in 1984. Her husband, Richard “Dick” died in 1989. Faye was united in marriage to Ivan B. Wallace on June 17, 1995. They continued living in Moline and enjoyed spending winters in North Carolina for many years. In October of 2012, Faye moved to St. William’s Living Center in Parkers Prairie to be closer to her family. Faye was a member of Salem Lutheran Church and its Bethany Circle. She was a former volunteer for the Hospital and Wyman House. She enjoyed volunteering, sewing, golfing, walking, reading and traveling.

She was preceded in death by her parents; husband, Richard; two brothers, Curtiss Harter in 2002 and Gale Harter in 2015; niece, Pam; and step-son, Roy Wallace.

To order memorial trees or send flowers to the family in memory of Faye Lind Wallace, please visit our flower store.