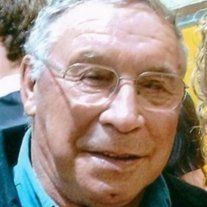 Visitation will be 5-8 p.m., 6:30 p.m., Knights of Columbus Rosary, 7:00 p.m., parish prayer service, Sunday at Our Lady of Seven Dolors in Millerville. The visitation will continue one hour prior to the service at the church.

Ervin was born May 6, 1932, shortly after his twin brother, Marvin, to Leo and Helen (Kroll) Lenarz at home in Effington Township, near Urbank. He grew up on the family farm where he helped his dad with the farming and livestock business. He went with his brother, Marvin to the Faribault School for the Blind for a year. He attended Country School District #85, before completing his education at the Sacred Heart School in Urbank. Ervin was always a true farmer and was in high demand, working for many farmers in the Urbank area. He was united in marriage on his 25th birthday to Darlene Prazak May 6, 1957. They were blessed with ten children and farmed together for 28 years, until Darlene passed away in May of 1985. Ervin was united in marriage to Orletta Eisenhuth October 25, 1986. He continued farming until his retirement in 1997. Ervin and Orletta took many trips visiting, Hawaii, Mexico and Alaska to name a few. They were privileged to winter in Arizona the past four years. He was a life-long member of Seven Dolors Catholic Church, Knights of Columbus for over 50 years, and served on the Millerville Creamery Board. Ervin loved his family deeply and enjoyed family get-togethers, playing cards, traveling and birthday casino trips with his girls.

To order memorial trees or send flowers to the family in memory of Ervin Lenarz, please visit our flower store.
Send a Sympathy Card