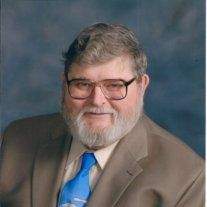 Visitation is 5-7 p.m., Friday at Lind Family Funeral Home in Parkers Prairie and continue one hour prior to the service at the church.

Ernest Hans Junker, Jr., was born August 22, 1941, to Ernest Hans and Jane Marie (Olson) Junker, Sr., in Bertha. He was baptized October 26, 1941, at St. John's Lutheran Church in Motley and confirmed May 1, 1959, at Faith Lutheran Church in Staples. He grew up in Staples where he graduated from Staples High School in 1960. Following his education he enlisted in the U.S. Air Force, trained in the police academy and served in the military police from 1962-1963. Following his honorable discharge, he was united in marriage to Frances Yvonne "Vonnie" Lee July 22, 1963. Following their marriage they lived in St. Paul where he worked for Armour Meats. They moved to Oregon where his first job was as a rancher. He then worked for the Oregon Forestry Service and as a police officer. They lived in various southern states before returning to Staples in 1975, where he worked at Benson Optical. He then owned and operated a gift store in Staples and auction houses in Staples and Motley, which he really enjoyed. Following his early retirement due to health reasons, he and his wife made their home in Parkers Prairie. His wife, "Vonnie" died July 19, 2002. Ernie loved making wooden covered wagons for his family and reading about and watching world war movies and events. Ernie enjoyed hunting, fishing, ham radios, recording movies, going to garage sales and playing with his dog, Babet and cat, Baby. He also enjoyed playing cribbage, Texas hold'em, 500, Spades and visiting casinos. He was a member of Immanuel Lutheran Church and the Alexandria Amateur Ham Radio Club.

He was preceded in death by his parents; step-father, Ray Fraser and wife.


To order memorial trees or send flowers to the family in memory of Ernest Junker, please visit our flower store.