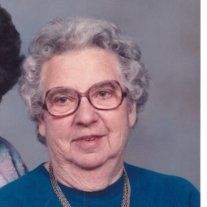 Visitation begins 5:00 p.m. and concludes with a 7:00 p.m., prayer service with Rev. Dennis Angland, Tuesday at Lind Family Funeral Home in Parkers Prairie. The visitation will continue one hour prior to the service at the chapel.

Ermal Elnor was born October 28, 1917, to William and Bertha (Holland) Carpenter in Leenthrop Township, Chippewa County, Minnesota. She was the youngest of six children. In her early years, she attended Maynard Presbyterian Church where she played the piano for the youth choir. She attended and graduated in 1934, from Maynard Public Schools. She was united in marriage to Harris H. Rademacher October 11, 1940, at Clara City Lutheran Church. Following their marriage they farmed in the Maynard/Sacred Heart area before moving into Sacred Heart in 1963. They lived in Bellingham for several years prior to moving to Parkers Prairie in June of 1973. They owned and operated the Ponderosa Bar & Grill in Parkers Prairie until Harris' death in 1987, at which time Ermal retired. Ermal moved into her daughter's home where she lived until moving to St. William's Living Center in 2006. She was a member of Our Saviors Lutheran Church in Sacred Heart. She enjoyed listening to organ and piano, especially Judy's students as they played for their lessons. She especially enjoyed visiting with her favorite niece, Jeanne and Roger Schwarze.

She is preceded in death by her parents; husband; three brothers, Wayne, George and Owen Carpenter; two sisters, Lela Mellgren and Elsie Weberg; favorite cousin, Marcella and Elmer Ellingson; and a great-grandson, Nicholas.

To order memorial trees or send flowers to the family in memory of Ermal Rademacher, please visit our flower store.