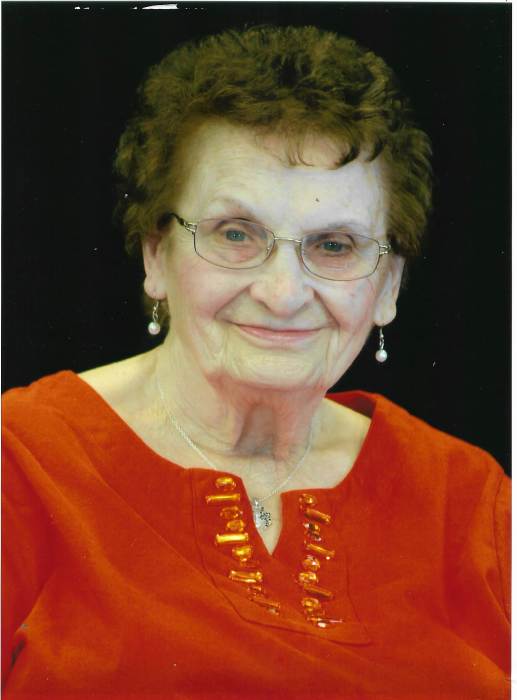 Mass of Christian Burial is 11 a.m., Saturday, February 11, 2017, at Sacred Heart Catholic Church in Urbank with Fr. Peter VanderWeyst officiating.  Music is provided by organist, Cassandra Kowalski and vocalists, Tom Dingwall and Jennifer Maloney. Burial is at the church cemetery.

Erma Dora was born September 20, 1928, to August and Lena (Wangerin) Hollatz on the family farm in North Effington.  She was baptized and confirmed at Zion Lutheran Church in North Effington.  Erma attended North Effington Country School.  Following her education, Erma was united in marriage to Leo Jesnowski on November 20, 1944, at Our Lady of Seven Dolors in Millerville.  Following their marriage, they farmed in Leaf Mountain Township where they raised their two children, Bernice and John.  Her husband, Leo died after 27 years of marriage. She was united in marriage to John Pinkowski in 1972.  Following their marriage, they moved to Urbank where they lived until John’s death 18 years later.  Erma had a special companion with Phil Levering for many years until his death. She continued to live in Urbank until she moved to St. William’s Living Center in 2011.  Erma enjoyed gardening, embroidery, cooking, canning, playing cards, and visiting and entertaining her grandchildren and great-grandchildren.

She was preceded in death by her parents; husbands; special companion; brother, Marvin Hollatz; and daughter and son-in-law, Bernice and Marvin Koep.

To order memorial trees or send flowers to the family in memory of Erma (Jesnowski) Pinkowski, please visit our flower store.