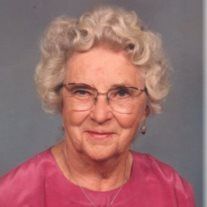 LIFE HISTORY FOR EMMELYN DANIELSON
Emmelyn Danielson, age 93 of Rose City passed away unexpectedly on Friday evening, January 31, 2014 at her home.
On July 9, 1920 a baby girl was born to Otto and Emma (Christianson) Peterson at their home in Spruce Hill Township, Douglas County, MN. They named her Emmelyn Margaret. Her mother was left to raise eleven children by herself after Otto's accidental death when Emmelyn was a child. On August 15, 1941 Emmelyn married Waldo Hewitt. From this union, three children were born, Daniel, Mary and Gretchen. After her husband Waldo passed away, Emmelyn later married Harvey Danielson on August 5, 1978. They farmed for many years near Rose City and were hosts for the annual Rose City Heritage Threshing Bee. Emmelyn was a member of the Rose City Evangelical Free Church and participated in many church activities and belonged to the quilting club.
Some of Emmelyn's hobbies included singing and playing the flute, quilting, painting, ceramics and reading. She loved country life and was an excellent gardener who canned many preserves each fall. She could often be found out chopping wood beside her husband, Harvey.
She is survived by her children, Daniel (Lynn) Hewitt of Eagle Bend and Gretchen Hewitt of Abudhabi, UAE; 7 grandchildren; 3 great grandchildren; a sister, Mary Noonan of Sun Lake, AZ; many nieces and nephews.
Preceding her in death are her parents, her husbands, Waldo Hewitt and Harvey Danielson; a daughter, Mary L. Hewitt; sisters, Ada Johnson, Thelma Beltmann and Karin Beatty; brothers, Hugo, George, Carl, Leonard, Norman and Albert Peterson.
Funeral services for Emmelyn will be held on Saturday, Feb. 8, 2014 at 2 pm at the Rose City Evangelical Free Church with Rev. Ralph Erickson officiating. Musicians are organist, Eilene Doble and soloist, Gretchen Hewitt and John Chandler. Burial is at the church cemetery with pallbearers John Chandler, Brian Friese, Dale Gunmundson, Bob Hudspeth, Delton Melzer, Steve Soderholm.

To order memorial trees or send flowers to the family in memory of Emmelyn Danielson, please visit our flower store.