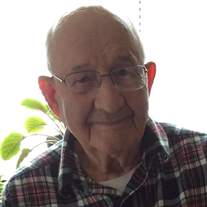 Elmer A. Beireis, age 85, of Parkers Prairie, died Saturday, April 9, 2016, at his home at McCornell Courts Assisted Living, under the care of Hospice of Douglas County.

Elmer August Beireis was born on August 28, 1930, to Henry and Clara (Decker) Beireis on the family farm, south of Bertha in Todd County. He was baptized and confirmed at the Evangelical Lutheran Church in Bertha. Elmer attended Country School District #172 in Eastern Township, Otter Tail County through the eighth grade and Parkers Prairie High School for a year. Following his education, he worked on a neighbor's farm until May of 1952, when he was inducted into Basic Training in Illinois. He was stationed at Fort Riley, Kansas. Following his honorable discharge, he returned home and worked at the Rose City Creamery. Elmer was united in marriage to Elnora Hanson on June 13, 1954, at Esther Lutheran Church. Following their marriage they lived on the Hanson family farm for the next 60 years, where they raised their family and farmed. After selling the dairy herd, Elmer went to work at the local lumberyard for 15 years. He and his wife moved into Parkers Prairie in April of 2015. Elmer was a member of Esther Lutheran Church, the church board for over 20 years and its cemetery board for nearly 60 years. He was a life-time member of Disabled Veterans and former board member of the Eagle Valley Co-op for 24 years. Elmer enjoyed mowing lawn, cutting down and burning trees, fishing, hunting, and traveling to Canada and Wisconsin. He took great pride in his grandchildren and especially enjoyed time spent with his great-grandchildren.

He was preceded in death by his parents; stillborn infant son; two sisters, Betty Carlson and Inez Thorpe; and brother-in-law, Rueben Thorpe.

To order memorial trees or send flowers to the family in memory of Elmer Beireis, please visit our flower store.