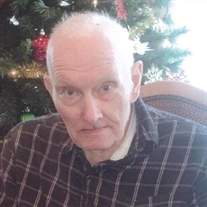 Ellsworth Joseph "Butch" Klimek was born on March 30, 1940, to Joseph and Dorothy Klimek in Wadena. Butch grew up on the family farm and helped his father. He loved farming, his family and cows. He was united in marriage to Carol in Battle Lake, where they raised their son, Casey and step-son, Troy. He moved to Dent where he lived for many years. He enjoyed trapping, squirrel and deer hunting. He was a proud uncle and especially enjoyed spending time with his nieces and nephews. Butch was a good hearted man and would help anybody if he could. He moved to Prairie Senior Cottages in Alexandria where he was cared for with much love the past four years. Butch's brother, Gene and former sister-in-law, Shirley had the privilege of spending his final days with him. He will be sadly missed.

He was preceded in death by his parents; nephew, Billy Joe; and many other family members.

The family wishes to thank the Senior Prairie Cottages Staff and Douglas County Hospice for the excellent care and love given.

To order memorial trees or send flowers to the family in memory of Ellsworth Klimek, please visit our flower store.