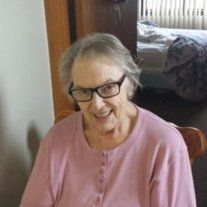 Visitation 5-7 p.m., Friday at the church and will continue one hour prior to the service.

Eleanor Mae Carlson was born May 20, 1934, to Donald and Jenne (Bunker) Richardson in Murdo, South Dakota. They lived on the family farm in Murdo until Eleanor was nine years at which time the family moved to Igloo, South Dakota. Eleanor graduated from Igloo High School in 1952. She was united in marriage to DeWitt "Gene" Carlson May 12, 1955, in Igloo. Following their marriage they moved to Denver, Colorado where they lived for 30 years and raised their five children. Eleanor was first a mother, but also worked as a home health aide, in addition to many other jobs over the years. She and her husband lived in Tucson, Arizona before moving to Miltona. She was a member of Faith Lutheran Church in Miltona. Her husband, "Gene" died February 23, 2000. Eleanor moved to Alexandria in 2005, where she attended Lakes Community Church. She enjoyed needlepoint, embroidery, reading, crossword puzzles and spending time with her grandchildren.

She is preceded in death by her parents; husband; sons, Charles Bradley Carlson and Eugene Enoch Carlson and brother, John Richardson.

To order memorial trees or send flowers to the family in memory of Eleanor Carlson, please visit our flower store.