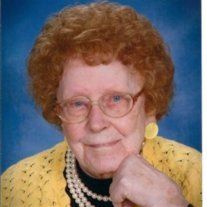 Visitation will be 5-8 p.m., Friday at Lind Family Funeral Home and continue one hour prior to the service at the church.

Edna Victoria Myers was born June 10, 1914, to Mekkel and Sigrid (Watnaas) Lokken on the family farm in Folden Township, Otter Tail County, Minnesota. She was baptized July 28, 1914, and confirmed October 3, 1927, at Folden Lutheran Church. She attended District #249, Sunnyside School in Folden Township and graduated from Henning High School in 1932. She was united in marriage to John "Jack" Myers at the First Baptist Parsonage in Parkers Prairie. Following their marriage, they lived in Parkers Prairie and Edna joined First Baptist Church. A short time later, they moved to Janesville, Minnesota where they started their family. In 1937, they returned to Parkers Prairie to own and operate the Parkers Prairie Independent. Her husband, Jack died in December of 1966. Edna continued running the newspaper until July of 1967, when she sold it to her son and daughter-in-law. Edna moved to St. Louis Park where she worked for an insurance company in Minneapolis before moving to Lakota, North Dakota in 1971, to work as administrator of the Good Samaritan Nursing Home. She retired in 1983, and moved to Fergus Falls where she lived until she moved to St. William's Living Center in August of 2002. Edna was a member of First Evangelical Lutheran Church. She was formerly active in the Degree of Honor in Parkers Prairie, Fergus Falls Senior Citizens Center, Sons of Norway and as a hospital volunteer. She loved to read and travel. She and her daughter, Lynne enjoyed a trip to Norway to visit relatives. She enjoyed making many hardanger items for her children, grandchildren and great-grandchildren.

To order memorial trees or send flowers to the family in memory of Edna Myers, please visit our flower store.
Send a Sympathy Card