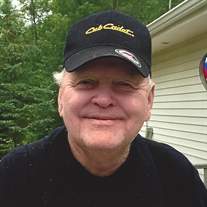 Mass of Christian Burial is 11 a.m., Saturday, February 13, 2016, at Church of Our Lady of Seven Dolors in Millerville with Fr. Peter VanderWeyst officiating. Music is provided by organist, Rachel Wagner and the church choir. Burial is at the church cemetery.

Edmond Harry Koep was born on May 26, 1940, to Edmond and Beulah (Johnson) Koep in Wadena. He moved with his family to rural Urbank at an early age where he attended country and parochial school. Following his education he worked for Urbank Bait and Spruce Center Bait. In the fall of 1965, Eddie moved to Canton, Ohio where he worked for Engine Improvement as an auto mechanic. He was united in marriage to Corrine Klimek on February 12, 1966, in Canton and to this union three children were born. In the spring of 1970, Eddie moved his family back to Minnesota where he worked for Urbank Bait until his retirement. In the fall of 1981, along with his wife, started a fur processing business, both tame and wild for trappers and fur dealers. They ran this business for 25 years. He was a member of Church of Our Lady of Seven Dolors. Eddie enjoyed hunting, trapping, fishing, and spending time with his family.

To order memorial trees or send flowers to the family in memory of Eddie Koep, please visit our flower store.