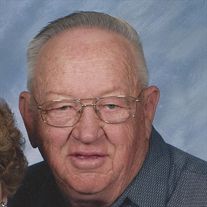 Earl Charles Mittag was born May 20, 1929, to Charles and Caroline (Reger) Mittag in Vining. He attended Deer Creek Public Schools and graduated in 1948. Earl attended the University of Minnesota for accounting. Following his education, Earl became the DHIA supervisor in Eagle Bend. He was united in marriage to Goldie Hertwig February 19, 1951, in Webster, South Dakota. Earl served in the United States Army from February 1951, until February 1953. Following his honorable discharge, Earl returned to Eagle Bend and became the office manager for the Eagle Bend Creamery. He served as Postmaster for the Eagle Bend Post Office for 28 years. Earl and Goldie also had a hobby farm where they hosted eleven foreign exchange students over the years teaching the practice of American farming. In addition to raising their two children, they were foster parents to five children. Following his retirement in 1989, he and his wife moved to rural Miltona. Earl was a former member of Immanuel Lutheran Church in Eagle Bend, a Self-Study Leader for the Missouri Synod North Church District, and member of Mt. Calvary Lutheran Church. He served on the Ag Advisory Board and was President of the Eagle Bend School Board for many years. He was the Benjamin Franklin Stamps Coordinator, President of the Eagle Bend Senior Citizen Center and was involved in numerous civic and church activities throughout the community. Earl and Goldie were honored by the Douglas County Sertoma Club for their dedication in volunteerism. Earl enjoyed deer hunting, fishing, raising sweet corn and gardening, especially roses. He was known for baking strawberry pie and banana bread which he generously gave away to family and friends. He was also known to make homemade chicken noodle soup and sweet rice for his family.

Earl was preceded in death by his parents; infant daughter, Gwendolyn; two brothers, Roy and Charles; and three sisters, Doris, Jeanette and Lucy.

The family prefers memorials to the American Cancer Society.

To order memorial trees or send flowers to the family in memory of Earl Mittag, please visit our flower store.