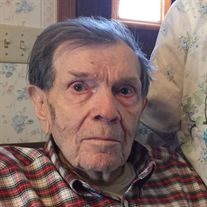 Visitation is 4-6 p.m., Friday at St. John's Lutheran Church in Garfield and will continue one hour prior to the service at the church.

Duwaine Herman Pomeranz was born March 20, 1928, to August and Rosie (Kemnitz) Pomeranz at home in Douglas County. He was baptized and confirmed at St. John's Lutheran Church in Garfield. He attended St. John's School for six years and then School District #17. Following his education, he farmed. He was united in marriage to Lois Brueske, and they were blessed with two children, Bonnie and Randy. Duwaine was a life-long farmer and member of St. John's Lutheran Church. He was united in marriage to Juliana (Daas) Wibstad on November 20, 1993, in Brandon. Following their marriage they continued living in Garfield until his death. He enjoyed hunting, fishing and dancing.

He was preceded in death by his parents; first wife, Lois in 1992; brothers-in-law, Ray Olson and Warren Augdahl; sister-in-law, June Pomeranz; stepdaughter, Lynnette Wibstad; step-grandson-in-law, Kevin Eddy; step-great-grandson, Chad Eddy; along with many other relatives.

To order memorial trees or send flowers to the family in memory of Duwaine Pomeranz, please visit our flower store.