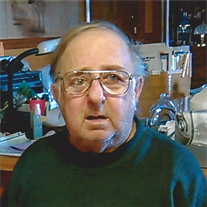 Duane Wallace Riedel was born May 6, 1939, one of six children, to Willie and Elsie (Thorpe) Riedel at home in Eastern Township. He was baptized and confirmed at Immanuel Lutheran Church. He attended School District #40, through the eighth grade and began working for Peterson Farms in Eastern Township at the age of 15. At 17, Duane started road construction with Mark Sand and Gravel for the next 20 years. He met his one true love, Myra Zastrow in Alexandria, and they were married on July 4, 1959. Duane and Myra bought and moved to the family farm in 1961, after their third child was born. They were blessed with three more children after moving to the farm. Duane retired from road construction in the early 1970's and continued dairy farming full time. In 2012, they sold the dairy portion of the farm and raised beef cattle until 2014, when due to poor health, Duane retired. He battled multiple illnesses and setbacks over the past years but could not fight any longer and a week prior to his death was hospitalized. He enjoyed deer hunting more than any other hobby. He also enjoyed socializing and gossiping with the locals over daily morning coffee. He loved his family immensely and enjoyed teasing his grandkids and great-grandkids. He looked forward to celebrating his birthday with family and friends and especially enjoyed a house full of people over the holidays. Duane was always ready to help others who were in need. He will be missed by his family and forever loved as God has taken him home.

He was preceded in death by his parents; sisters, Edna Raap and Ruth Bowland; brothers, Harold and Chester; daughter, Vickie; and grandson, Lucas.

To order memorial trees or send flowers to the family in memory of Duane Riedel, please visit our flower store.