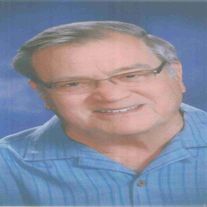 Stephen Todd Pushing was born September 13, 1942, in Olivia to Vernon and Gwen (Kundert) Pushing. Todd grew up in Olivia and graduated from Olivia High School. He attended Hamline University prior to the University of Minnesota, where he graduated from the School of Dentistry in 1967. Following his education, he worked as a dentist in the U.S. Army at Fort Bragg in North Carolina for two years. Following his honorable discharge, he returned to Minnesota and bought into a dental practice in Madison. He was united in marriage to Susan Meyer in 1967, and their marriage was blessed with two daughters. Todd's passion was dentistry, and what he found most rewarding about his career was helping people feel good about their smiles. He retired after 38 years of service at the Madison Dental Clinic. Following his retirement, he enjoyed spending time with his significant other of 20 years, Barb. They enjoyed time on Lake Le Homme Dieu, and his farm south of Madison, concerts and theater. His hobbies included hunting, fishing, skiing and traveling around the world. He especially enjoyed driving, racing and caring for his Corvette and Porsche the past 40 years. He had a pilot's license and enjoyed flying for 15 years. He was a long-time member of the Madison Kiwanis Club, served on the founding board for Prairie Arts Center, and Board of Directors for the Hospital and Lutheran Home in Madison. He was a member of the Congregational Church in Madison and First Congregational UCC in Alexandria.

He was preceded in death by his parents; and sister, Carole Burch.

To order memorial trees or send flowers to the family in memory of Dr. S. Pushing, please visit our flower store.