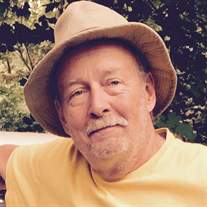 Douglas Vance Jewson was born May 25, 1940, to Vance and Ruth (Hathaway) Jewson in Minneapolis. He attended Washburn High School, graduated in 1966, from the University of Minnesota Medical School, and completed an internship and residency in Internal Medicine and a fellowship in Cardiology at WVU Medical Center in Morgantown, West Virginia. Following military service as Chief of Medicine and Cardiology at Irwin Army Hospital, Fort Riley, Kansas, he practiced in private medicine until the year 2000. His church affiliation was Alexandria Covenant since 1992. Doug and his wife of 35 years, Diane, made their home on Lake Carlos. His hobbies were genealogy, photography, woodworking, walking and cutting wood to keep, as he would say, "his southern wife warm." He loved activities with his children, grandchildren, and many nieces and nephews, especially summer and winter activities with his extended family. During his later years, his admiration for his beloved mother-in-law and two others who were in Christian ministry led him to writing and publishing their biographies.

To order memorial trees or send flowers to the family in memory of Douglas Jewson, MD, please visit our flower store.