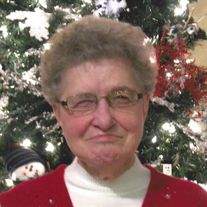 Dorthy Frieda Ost was born December 29, 1935, to Albert and Emma (Pflugradt) Ost in North Effington Township, Otter Tail County. She was baptized January 26, 1936, at Zion Lutheran Church, North Effington and confirmed May 21, 1950, at Immanuel Lutheran Church in Parkers Prairie. Dorthy grew up on the family farm in North Effington and attended country school. Her family moved into Parkers Prairie in 1975, and she began working at DAC. When her parents moved into the nursing home in 1979, Dorthy moved to Dent and lived at the Peleske Group Home and worked at the Dent DAC. The Peleske Group Home closed in 2005, so Dorthy moved to the Sunset Home in Frazee, which is owned and operated by Keith and Beth Janu. She worked at Productive Alternative Inc., in Perham helping various businesses in the community until her death. Dorthy enjoyed spending holidays with her family, traveling with the Janus and attending their kid's sporting activities. She was a member of the Perham Senior Center where she enjoyed playing bingo. She absolutely loved playing cards, word find, games on her laptop, watching television, music and shopping. Dorthy especially enjoyed her friendships, both at work and home.

She was preceded in death by her parents; infant brother, Orgene; infant sister, Darlene; and sister, Ordella Fjoser.

To order memorial trees or send flowers to the family in memory of Dorthy Ost, please visit our flower store.