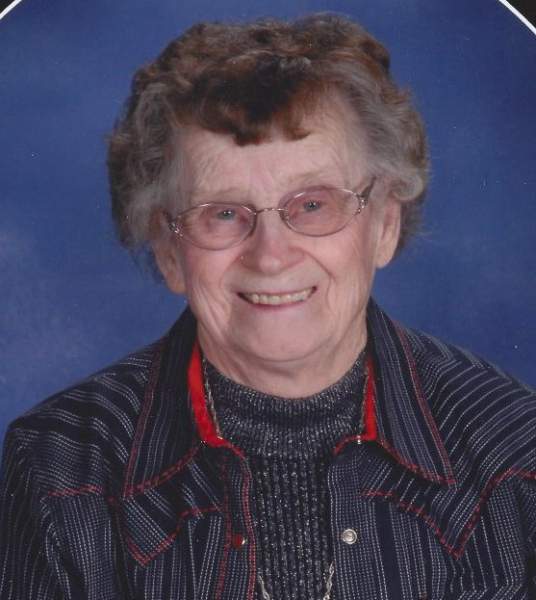 A funeral service will be held at 11 a.m., Saturday, February 12, 2022, at First Evangelical Lutheran Church in Parkers Prairie with Pastor Rachel Stout officiating. Music is provided by organist, Julie Lindgren and soloist, Dedra Zwieg. Doris’ service will be livestreamed on her obituary page on the funeral home website or by clicking HERE. Interment will take place at Swedish Lutheran Cemetery, Parkers Prairie.

Visitation is from 4-6 p.m., Friday, February 11, at Lind Family Funeral Home in Parkers Prairie and will continue one hour prior to the service at the church.

For the protection of family and friends, please wear masks and practice social distancing. If you are not feeling well, please stay home.

Doris Ruth (Peterson) Paulson was born in Alexandria, MN on August 31, 1929.  She was the youngest of two children of Albert John and Hilma (Peterson) Peterson.  She was baptized on November 9, 1929, by J. Edor Larson and confirmed on May 30, 1943 by Rev. Lambert Engwald at First Lutheran Church in Parkers Prairie.  She spent her childhood on the family farm north of Parkers Prairie attending Highway Park Country School and graduating from Parkers Prairie High School in 1947.

Following graduation, she began working as a bookkeeper, first for the Ford Garage followed by the Parkers Prairie Creamery. She served as parish secretary for First Lutheran and Esther Lutheran churches for several years.  in 1966, she began her career at Parkers Prairie High School (PPHS) as Secretary to the Principal, retiring in 1994.

Doris married Leonard August Paulson on January 20, 1951, at First Lutheran Church in Parkers Prairie.  They settled in Eastern Township in 1954 where they farmed and ran a beekeeping honey business.  They had one daughter, Ruth.  They retired from farming in 1998 and continued to live on the farm until Leonard’s death in April 1999.  Doris moved to Parkers Prairie in November of 1999.

Doris loved life and any and all people she came in contact with.  She was a loving wife, mother, grandmother, and great-grandmother leaving us with many wonderful memories that we will cherish forever.  She enjoyed her many years of work at PPHS.  She saw the potential in every student and often said “you can’t judge a kid in high school because you don’t know yet what they will become”.  Her favorite moments were when a former student would recognize her and stop to greet her.  She was immediately interested in hearing all about their lives, including their work, where they lived, their family and sharing a special memory from PPHS.  Doris enjoyed the outdoors tending to her lawn, flowers, and beloved rhubarb.   Most of all, Doris loved Parkers Prairie, choosing to spend her final days at St Williams Living Center rather than moving closer to family.

To order memorial trees or send flowers to the family in memory of Doris R. Paulson, please visit our flower store.